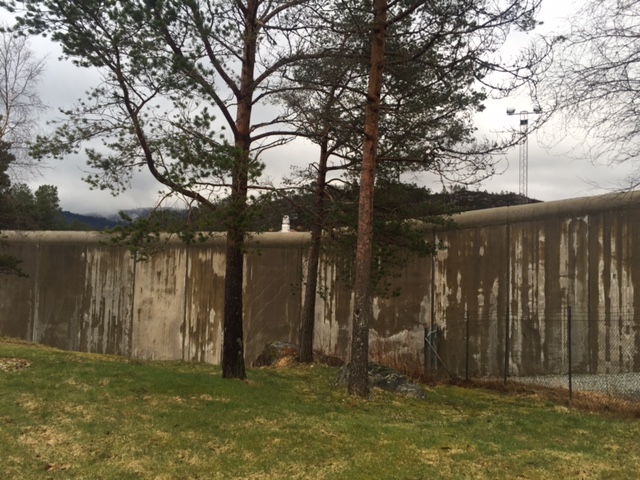 I feel like I have been through the mill since the optimism of my last post. I am tired and Bergen is very wet and grey with low cloud sitting on the mountains, low cloud sitting on my brain. I had a bit of a research-crisis just before I started at the prison, a bit of a ‘whats the point?’ moment prompted by a critic (or maybe a voice in my head), who basically said:

“The UK has a million more problems than Norway – is a million times more complex – Norway has the luxury of living at snails pace, where things can be seen more clearly. Their range and volume of offences is smaller. The UK invented the modern prison – they will never go against their own blueprint – its ingrained and will never change. What ever you learn – you wont change anything back home”

I agree with much of that, obviously the social situation in Norway is totally different and the numbers are totally different – but surely that does not mean there is nothing to learn? Exchanging and sharing good practice is always useful? Or is it ? What can I really do with Stretch to make any difference?  Do any policy makers really listen to me? After soul-searching, coffee, getting lost and wet I had a word myself and decided that on the whole I am an optimistic person. I am a campaigner – a believer. I want to believe that change is possible, and that maybe I can affect it somehow, I have faith and hope. By the way, Norwegians are 2nd in the worlds top coffee drinking nations? How bizarre is that? Italy doesn’t even make the list. Here’s a picture of some beautiful fjords, they helped me find some perspective anyway. 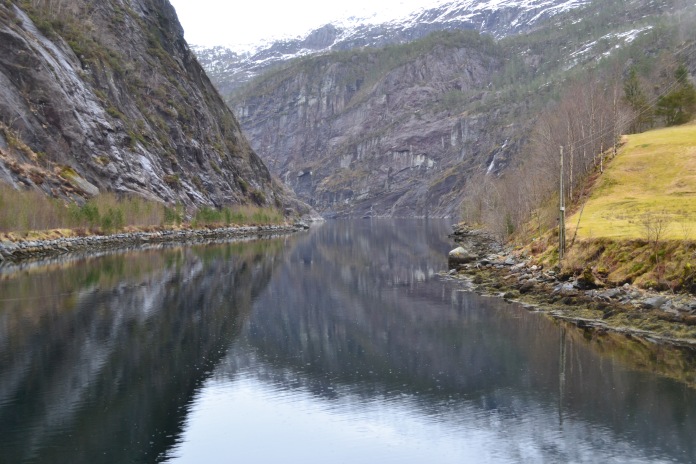 I know I can’t change the world, but I can scratch away at a few problems in my own little niche, at least I am doing something. I probably should not have arranged to to deliver a storytelling workshop with the prison, as I am not here to help the prisoners of Bergen – I am here to talk to staff and observe systems and bring the knowledge back. I wanted to do one workshop while away however, it’s how I really get under the skin of the prison. Staff and prisoners open up to me, we do a lot of talking. 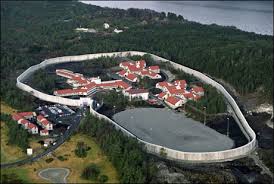 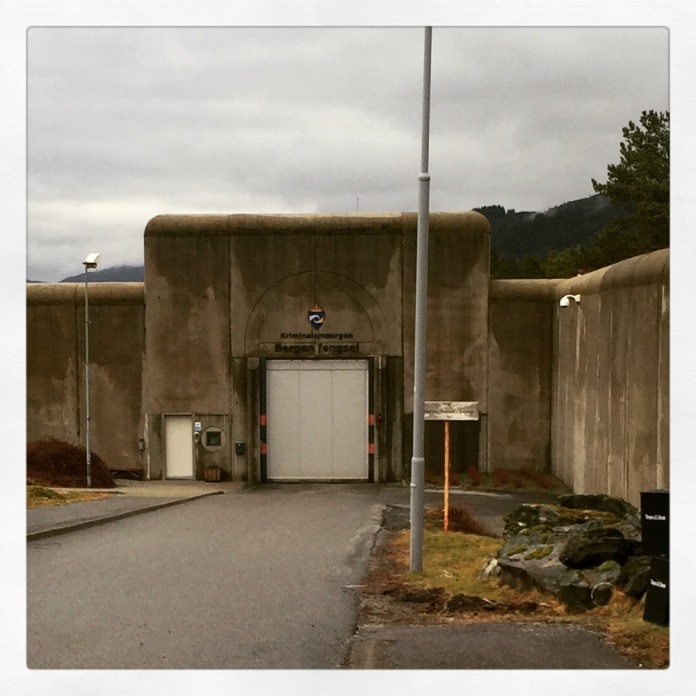 Bergen prison is a bigger prison that the last Norwegian prison I visited 4 years ago, it is considered ‘big’ at full capacity holding a ‘whopping’ 650. I was met by a very jolly newly qualified craft-teacher-guard called Ellen, she was to look after me for my stay. I quizzed her about the training, 2 years paid apprenticeship to get on the programme – people get turned down all the time, they ask you bring another skill, some are carpenters, engineers etc. I am getting a bit obsessed with staff training issue, really think it could make a huge difference in the feel of the prison. The approach to the prison was as gloomy as any British prison, the prison wall is huge and grey – this isn’t the famous Halden Prison with its sea views and decking. If it looks like Wormword Scrubs what could I possible learn here? ( the doubter piped up). Inside how ever the atmosphere is open and relaxed. Like the Australian prisons I really favoured, it is set out as campus with 5 blocks that the prisoners work their way around, from ‘remand’ through to the ‘half way house’ out side the walls. The middle blocks were set out with maybe 8 singe cells around a kitchen and living area.

I did not see many prisoners. It was not encouraged to disturb them, they were asleep in their rooms. There were workshops, lots and lots of Norwegian wood, metal work, jewellery, soap and candles. The grounds were far from perfect however, lots of building going on, the library was closed and had been for a while, and the use of technology was scant. This wasn’t the prison nirvana I was expecting by any means! But – what pulls Bergen Fengsal away from the pack is the community spirit, there is definitely something happening with the mood and the relationships in there which is unusual. I have started a digital storytelling project, with women in the end, which I will expand on in a more dedicated storytelling blog next. I have interviewed a few male prisoners and talked to and observed the staff. One career criminal, who had been in and out of prison most of his life and is now serving a 12 year sentence, tried to explain it to me, he said;

“I have been in Halden and it was a strange place, even though it has very good equipment and computers in rooms – the Director only appears when the newspapers are there and there are no guard around to answer your questions or talk to. The security systems mean you have apparent freedom and swipe cards, but there are more fights than in Bergen, prisoners go a bit crazy”

So it would seem that a certain amount of authority present is better. In Bergen the guards are not over friendly with the prisoners, but each one mentors about three prisoners, and prisoners do not walk around on their own – they are pretty much always with a guard – in a lot of prisons there is often a ‘free flow’ time when they can make their own way between places, opening up opportunity for bullying and abuse – the prisoners do not seem to mind. They genuinely appear to like the officers and in fact like each other, perhaps this is the empathetic prison? Lots to learn after all

One thought on “Fifty shades of Bergen”