My presentation was scheduled for 10 am on the Tuesday morning. All I had to do was survive the ‘conference dinner’ in tact. No mean feat, those Aussies sure can drink. I was feeling bit flat before the dinner I had been meeting and greeting so many strangers and ‘selling my self’,  gets a bit tiring. The conference dinner started with a talk by Kylie Farmer, a proud indigenous Australian actress who has done a lot of work in her original language. She was amazing, beautiful, charming and had a lot of thought provoking stories from her culture and her people. Kylie talked a lot about language, she had presented a children’s TV programme in her original language – I since found out she’s done a TED talk on it. She stresses the importance of language to feel connected to your community and the land. The connection with the ‘elders’ of the community that raised her and the passing on of the language leads to a deeper and more authentic connection.  It made me quite sad listening to her that I could never interact with my own mother and her family in their mother tongue of Italian. Perhaps a bit of a feeling of ‘otherness’ or ‘outsider’ from my childhood comes from this.  It probably has deeper repercussions than my parents or I realise, for my connection to that community, one to save for my therapist – but its not really rocket science is it? (*books Italian lessons, again…)  I did end up on the dance floor, like a bad wedding, in the corner of the conference dinner room, seems its the Juvenile workers – the ‘Juve’s’ who can party the hardest. 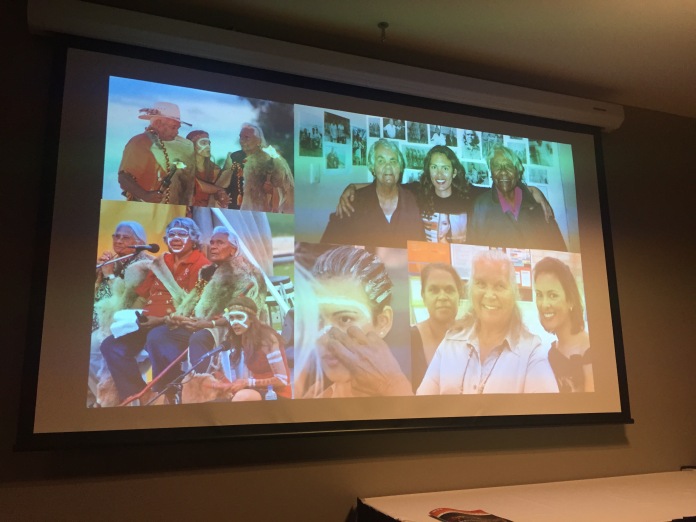 There had been a few sessions on digital technology in prisons – what appears to be apparent, the same as in the UK I think, that there is no consensus or joined up thinking. In fact one presenter was reporting back on a European conference and said the same. This is a global lack of consensus then – there are pockets of innovation and some prisons trying things but it is dotted around and varied with mixed successes. It was agreed it would be good to have a joined up ‘evidence library’ of what is happening where and what works. We all hear about the connectivity in Norway, but even there it is not every prison, I saw some great projects in Australia that would not go in the UK, but then again I am taking iPads into Sodexo prisons but other prisons laugh me out of town at the suggestion.

New Zealand were piloting some interesting work. They felt is was a duty of care to prepare people for the online world they go out to, the feel ‘obligated’ to train people in that technology, which I strongly agree with – so they offer a few courses online, real online courses like driving theory and things that people in prison might really want to learn.

I had a good turn out for my session, about 30-40 people, it was a success. Many people came up and thanked me and said how moved they had been. Of course I played my trump card, where was the prisoner voice? why am I the only ex-prisoner here?  People earnestly held my hands and kissed my cheeks in thanks and said they had been moved to tears. Result. I spoke about my new employee Fabian Spencer, an ex – prisoner, actor and now going into prisons as a Stretch story teller.

I spoke about the importance of celebrating the good stories, or providing peer support. The art teachers and the creatives all ‘got it’ of course – also a lot of interest from some weighty criminologists. I met a fascinating English couple now living in Australia – both Doctors of Criminology in their 60’s – he had spent time in prison many moons ago. I had really wanted to show some of the work from the AMC centre but they had not been cleared by security yet, I am still waiting. The team at Victoria who had been so supportive were thrilled at the response – we talked about ways they could incorporate the methods into their work. If I pushed it I think they might invite me out to do some training with their education staff. Fancy that. 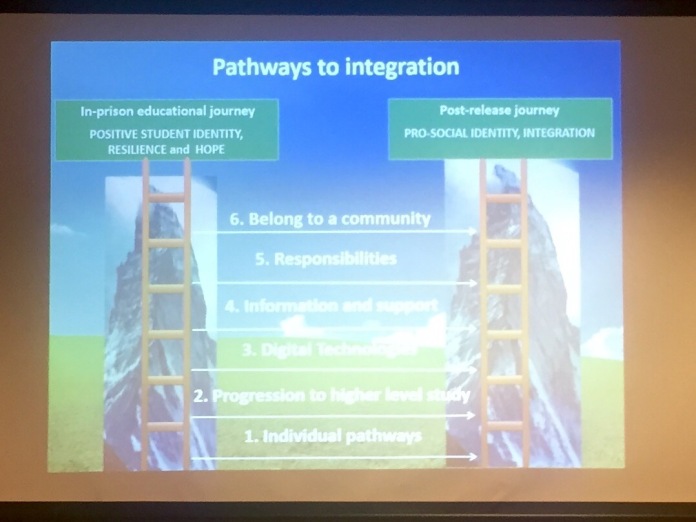 Tuesday afternoon saw people presenting their academic research, sounded deathly dull and I was suffering from mental over load already – but actually turned out to be really interesting. Anne Pike is a from the UK and she works for the Open University and was looking at how prisoners and  ex-prisoners cope with being students. A few universities have thought about packages for prisons, as so much of being a student is now delivered online. She also touched on ‘asking the prisoners themselves’ what they want. Fiona McGregor made an inspirational presentation on looking at prisoners relationship to education in terms of desistance theory. I have a couple of possible PhD ideas that have been swimming around the back of my mind for while, one around storytelling and desistance theory and one around using your imagination to fight disconnection. As I listened to their presentations,  I thought ‘I really could do this’ – I might make fresh enquiries upon my return to the UK.

The conference wrapped up without too much of a fanfare, I was mentally exhausted and sloped off quietly, I could chase every one up in emails. On the whole it was what I had expected, pockets of brilliance but a general slip in to US style practice. Very difficult to have a unified thought with such differing state laws and vast geographical and cultural differences.  As in the UK, very much affected by the politics and public opinions of the day.